The new wing opens Monday, with 19 private rooms, each with its own bathroom, shower and sink. Six existing inpatient rooms will be renovated to match the news ones, bringing the total number of rooms to 25, said acting Chief Executive Officer Terri Vieira.
In the old inpatient wing of the hospital, built in 1963, each room had two beds with one toilet and a sink to serve four patients, so it was time to modernize for patient comfort and privacy, Vieira said.
“This is big for this community,” Vieira said. “This speaks to the fact that health care in the Sebasticook Valley region is important and it speaks to our future here. We’re making a commitment — we’ve been here for 50 years and we plan to be here in the future.”
The new wing at Sebasticook Valley has five large “super suites” with two beds each, a couch, television, private walk-in shower and large windows, all separated by a retractable wall for privacy for longer term patients.
The expansion also includes three special care rooms, with a lift system that can take critically ill patients directly from bed into a nearby shower room.
Vieira said the hospital serves more than 30,000 people a year. 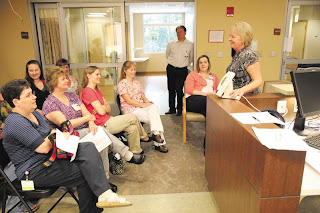 “I believe health care is local and we’re going to be here for those communities and those people,” she said.
Vieira said 25 beds is the maximum allowed for rural, so-called critical access hospitals to be eligible for federal funding. The designation was established by federal law for special payments under the Medicare program.
“We have 25 beds — we did not increase our number of beds,” Vieira said. “They will just be more private, larger and all will have a private bathroom.”
The layout, with earth tone walls, deep carpeting and low ceilings with acoustic tiles to absorb sound, is a loop of patient rooms with staff work stations down the center of the loop. Doors from the service stations open onto each corridor of the loop.
“We tried to create space that was soft, with natural colors,” Vieira. “There are wood panels; green and tan colors. We tried to use as much natural light as we could, to bring the natural elements inside; flowers and vines and leaf patterns on the wallpaper and curtains.” Read More

“Basically, we’re providing better spaces for patients to heal in,” said Jennifer Yarbrough, director of marketing for Sebasticook Valley Hospital. “We did hear the needs of the community and we responded accordingly.”

“This is a new layout for the future and I think a lot of hospitals will be presenting this kind of format with private rooms and thinking about patient wellness,” Yarbrough said.

The wing is also designed to keep noise to a minimum, she said. There are four nursing stations, a kitchenette and bedside controls that operate lights, control the television and call nurses for specific reasons like water, pain medication and help into the bathroom.
“It was really time [for an upgrade],” said Yarbrough. “Those [old] rooms are from 1963. It was really state of the art then, and now they’re just too small for the new equipment and we had too many people sharing one bathroom. It was a matter of privacy and patient dignity.” Read More